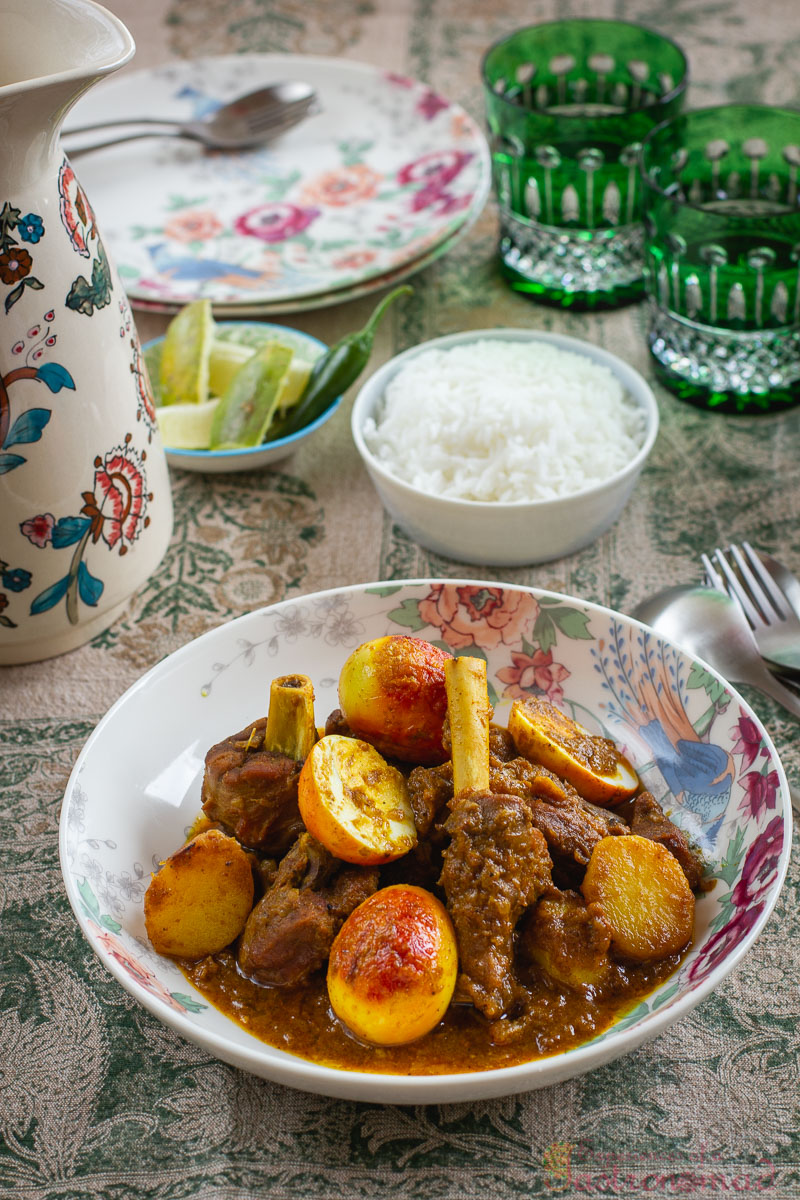 The Raj, as any colonial historian would remind you, was perpetually on the move.

Administering a country as mammoth and spectacularly diverse as the subcontinent was by no means any less than a punishing ordeal. It necessitated almost perennial travel, criss-crossing vast stretches of terrain, intractable and  inhospitable.

Young officers, fresh from elite public schools in England, just off ships after months of voyage, made forgettable by sea-sickness and nausea, and still addicted to their pies and puddings, were, even before it dawned on them, thrown into this chaotic cosmos that the subcontinent was.

The locomotive was still decades away from reaching this farflung colony of the Empire. And travel, while one did have relatively more luxurious options of sailing on bajras wherever it were feasible or be carried on palanquins, was largely on horseback. Arduous and painstaking. Days at a stretch spent on the saddle.

The heat was oppressive.
The dust and grime suffocating.
The storms fiendish and the rains torrential.The spices ravaged their stomachs, the water far from potable and dysentery stalked the Englishman with unceasing gusto.
Not to forget were swarms of blood-sucking mosquitoes and the scourge of malaria, wild animals forever on the prowl and venomous snakes that hissed death.

The officer, unknown to even himself, had been hurled into this manic universe where death and disease stared him in the face.

Around the 1840s, acknowedging that travel was indispensable to able  administration and to somewhat address the grave perils almost synonymous with travel, dakbungalows and circuit houses started to spring up on the commonly traversed routes. The concept of an official network of rest stops was by no means novel, dharmashalas had functioned as rest houses for pilgrims for long and Mughals had serais for centuries, although a lot of them had fallen into disuse by now.

The dakbungalow was spartan in its offerings – a bed, a bath. And if you were lucky, a khansama who would cook a hearty meal for the evenings. To accompany the gin and tonic.

This is the story of the humble beginnings of the Dakbungalow cuisine. Cooked by the khansama for the travel-weary enervated  sahib. Unpretentious and earthy, fresh seasonal produce, moderate local spices that suited the Englishman’s palate and a jungle fowl or goat culled if the guest were high-ranking or the khansama so willed.

Sadly enough, lack of documentation implied that most of the Dakbungalow cuisine is now lost. Barring instances where recipes have been handed down generations in the khansama‘s family. 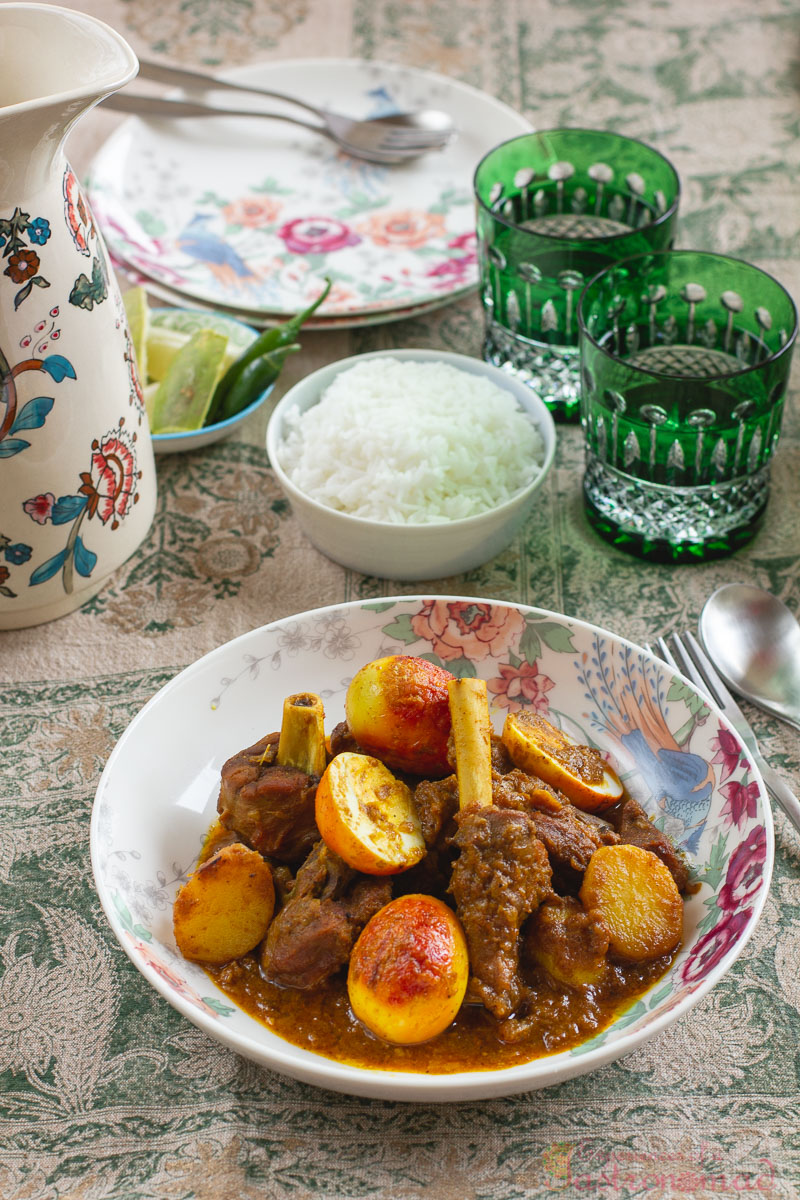 Or where an enterprising memsahib, enthralled by a dish, diligently jotted down notes of the recipe, often sharing her scribbles with the khansama in command of another dakbungalow she was passing by, with a request to religiously follow the same recipe.

Thus the dakbungalow recipes travelled as did the Raj.

Every khansama though was gifted with a mind of his own. So every time the dish was replicated, it hid an ingenious tweak. Or a lazy shortcut. A new spice. A missed ingredient. Or just a variation in the proportion of spices. All depending on what was in store in the khansama‘s frugal pantry or as the khansama fancied.

And that recipe then travelled on.Which kind of explains the mind-boggling array of spice mix recipes I was confronted with, when I set out to research my Mutton Dakbungalow.

Here’s my version of the Mutton Dakbungalow. Mutton cooked in yogurt. Perfumed with ginger and an aromatic spice mix. Fried potatoes and boiled eggs in tow.

A Mutton Dakbungalow remains an absolute bliss with that bowl of piping hot rice even to this day !!! 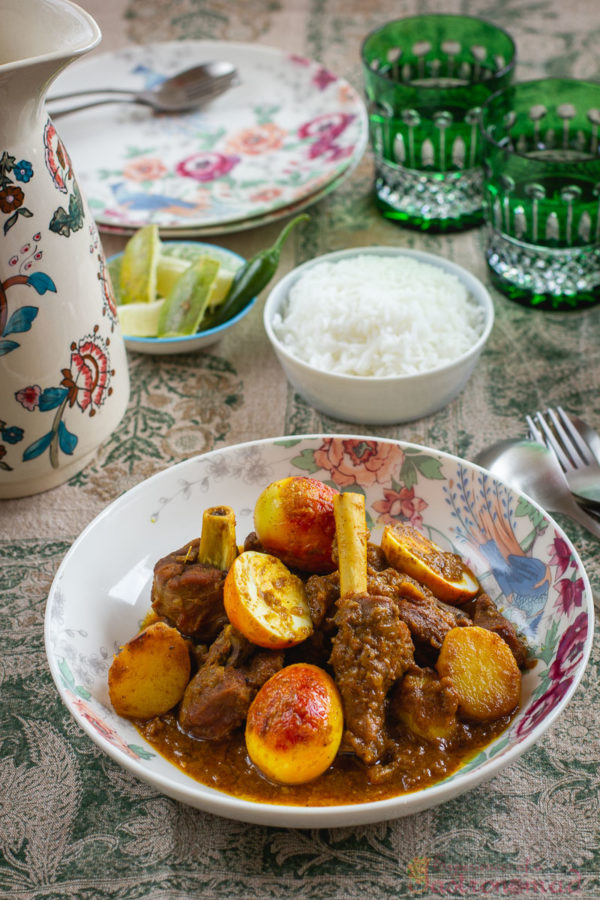