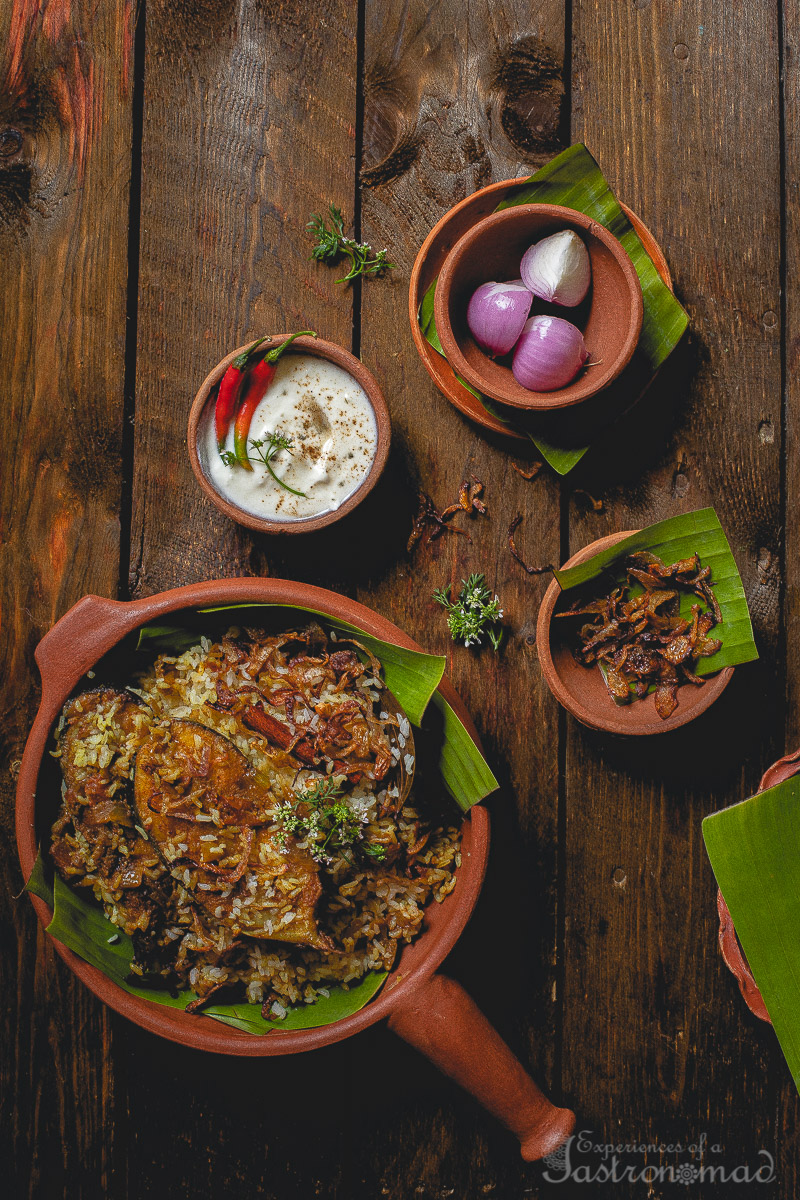 Maacher Biryani ? A cynical S had asked me.
We were in Hyderabad, savouring a delectable biryani, accompanied with a tear-jerking spicy mirchi ka salan, and as you might have guessed, the conversation had inevitably drifted off to the eclectic topic of biryanis.

Who cares, S had remarked in jest, that the biryani didn’t originate in Bengal ? I doubt if anyone else could match us in our unadulterated passion for biryanis.
No, I had not disagreed.

I was by now familiar with S’ biryani bias.
It was clear he adored his lamb biryani, he preferred the Awadhi version to the Hyderabadi one that we were now relishing, the sight of spuds in his biryani lit a twinkle on his face and he wasn’t really gracious with his views on the vegetarian version.

And what about fish biryani ? I had asked. Absentmindedly.
Fish biryani ? That expression had given it away.
Come on, I tease, don’t tell me you’ve not had an Ilish Biryani.
S wasn’t one who loved to admit his ignorance when it came to food.
But today he had been left clearly stumped.
I chuckle.
I cannot comment about authenticity, I start, carefully, with a caveat, but Ilish Pulao, once or twice a year during the raging Assam monsoons when the Padma would be in full spate and Ilish in glorious abundance, was not uncommon at home in Karimganj.
But that’s a Pulao, the man had exclaimed.
And this had been enough to digress the conversation to another esoteric topic – the difference between biryanis and pulaos, something that, pardon my ignorance, I haven’t found a credible answer for to this very date.

Fast forward a couple of years, on a holiday to Cochin, we discover the delectable Thalassery Biryani, introduced by enterprising Arab traders to the northern coast of Kerala. The long-grained fragrant basmati is conspicuous here by her absence (in favour of the local jeerakasala rice) but the cynosure is the gorgeous seer fish !! 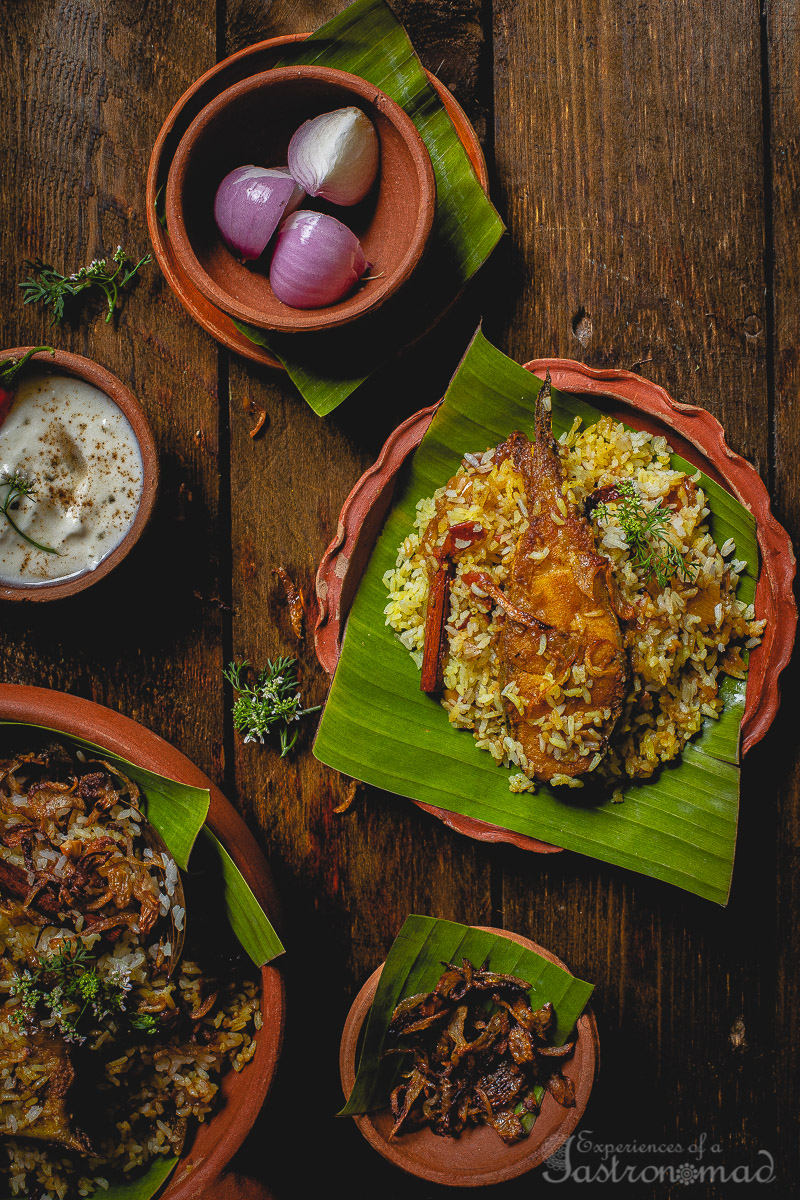 Cut to the present.
Fish Biryani no longer raises consternation in the man, we are comfortable with our Ilish Pulao and the Thalassery Fish Biryani graces the table every now and then when we get seer steaks from the fishmonger.

So when the fishmonger sends home some gorgeous boal steaks, I decide to muster courage and whip up a Boal Maacher Biryani. Inspired by the Moplah version.

Boal Maacher Biryani. A match made in heaven between the fragrant gobindobhog rice and the boal steaks. Perfumed with a potpourri of aromatic spices.
Bliss, isn’t it ? 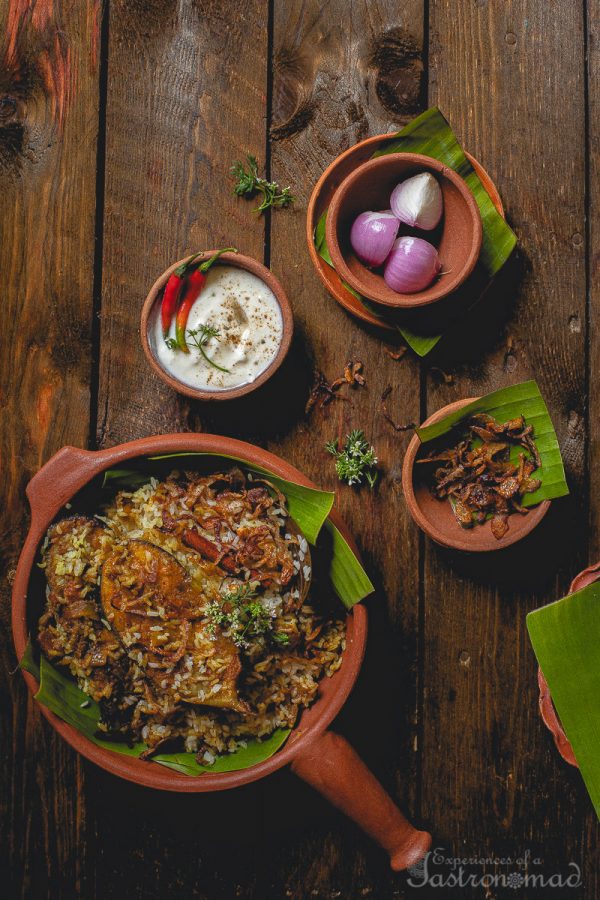