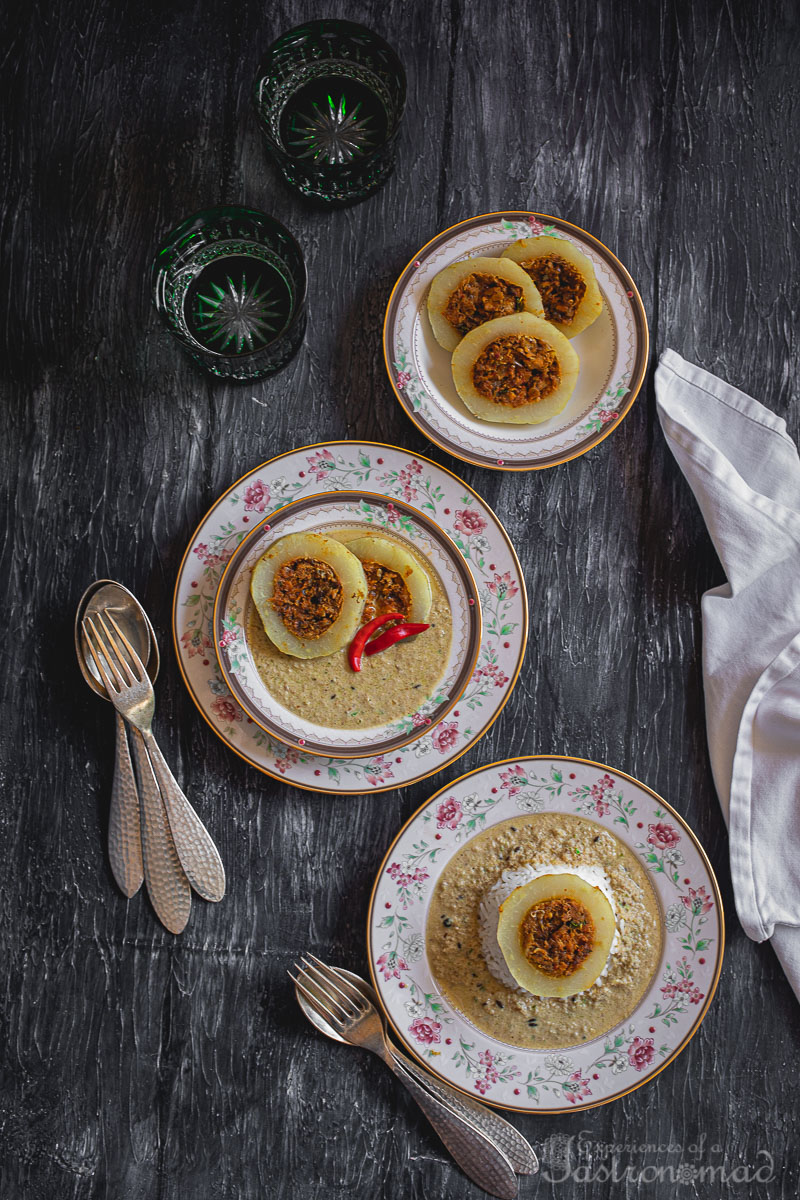 The heat has been excruciating over the last couple of days. The humidity punishing. It’s a just a week to the summer vacations and Dada and I are already grumbling at the prospect of needing to stay indoors.
No going out in the sun, Bapi has been stern, and remember to drink plenty of fluids.

Today has been particularly agonizing.
It’s post lunch.
I toss and turn on Grandma’s ancient four-poster. Pretending to sleep.
Grandma is absorbed in her leather-bound Ramayana.
Didi is engrossed in the kantha she is stitching, spools of thread in variegated hues lie in a frenzied disarray on the floor beside her.
The ancient fan whirrs above in soporific monotony.

I don’t know when I fall asleep.

A ear-splitting clap of thunder shakes me out of slumber.
I call out to Grandma in distress. Not seeing her around, I call out yet again.
It’s dark outside. Night it seems has eclipsed the day. There’s an ominous lull. A throbbing stillness. No birdsong greets the ears. Not even a leaf flutters in the backyard.
What time of the day is it, I wonder.

A lash of lightning zigzags across the canvass of the dark sky.
Almost anticipating a deafening roar, I put my fingers to my ears. One… two… three… I count, petrified, as a peal of thunder reverberates across.
That’s Devraj Indra wielding his Vajra to slay the wicked demons, Grandma had assured, in her usual benign calmness, one such afternoon, when intimidated by the roars of thunder, I had taken refuge in her lap.
Lightning and thunder continue to hector an already ravaged earth, a blinding flash of light followed almost religiously by a macabre rumble.

And then the storm hits. An unruly rambunctious force steadfast and firm in its resolve to decimate everything in its path.
Grandma’s battered aluminum bucket, standing by the well in the courtyard, is swept away mercilessly.
Didi hurries to the backyard to collect the clothes left to dry in the sun.
A blue tarpaulin sheet drifts away, liberated from her ties.
The tormented trees in the horizon genuflect to appease the irate storm gods.
The morning newspaper resting on the table flies around like a dervish possessed.
Grandma and Maa rush to shut the windows.

And then come the rains. Torrential. Violent.
I can see the horizon no longer.

The fury of the kalboisakhi continues unabated for an hour.
And then a blissful calm descends.
A pleasant cool, far removed from the sweltering heat of the morning.

Come over to the garden with me, Didi suggests, a lantern hanging from her elbow, once the rains have stopped.
I follow.
Devastation all around.
Uprooted plants. Trampled flower beds. Destroyed fences. Our calf, visibly shaken, cowered in the corner of the shed. Didi pats her lovingly.

We walk to the mango trees.
Didi adjusts the wick of the lantern and flashes it around.
And its then that I see them – scores of green mangoes lying, forlorn and defeated, on the wet earth. Rendered homeless by the gale.
Didi and I start picking up the mangoes.
Let’s get a basket, she advises when our hands can carry no more. 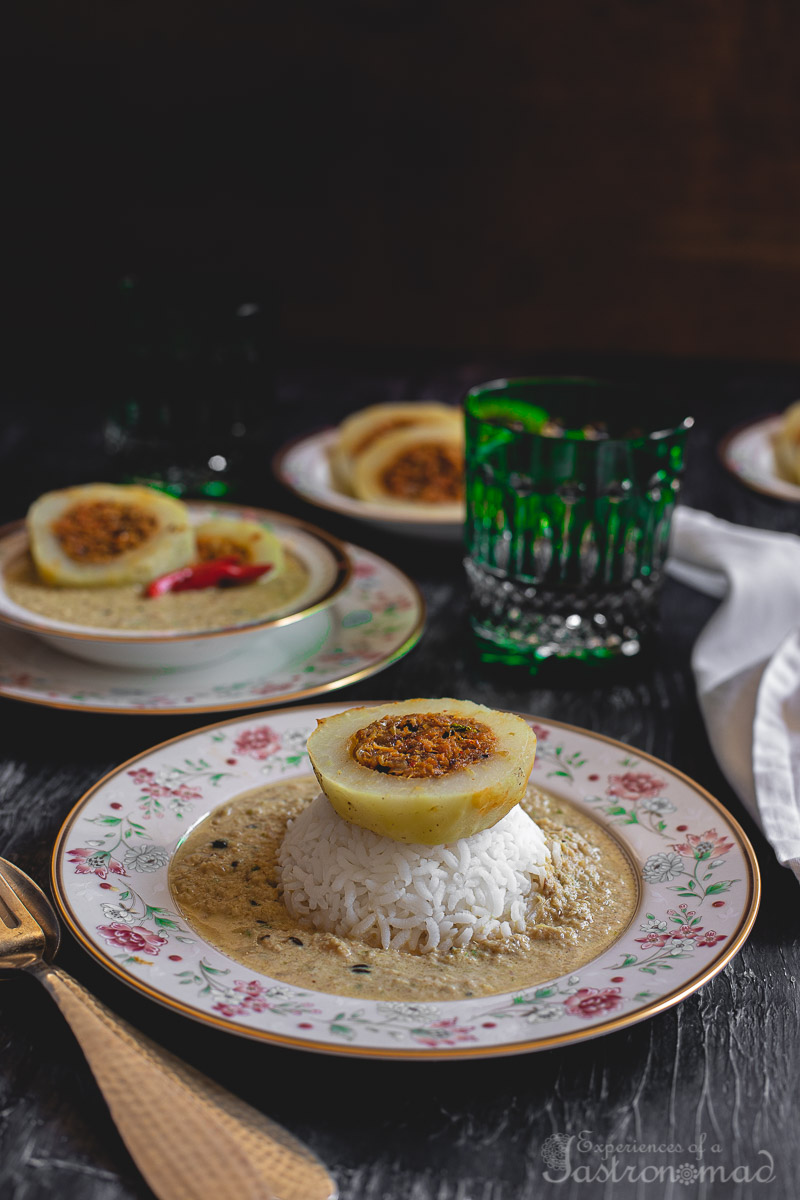 It’s while returning we notice the papaya tree.
Vanquished by the might of the kalboisakhi.
And a scatter of baby papayas all around.
Grandma suggests a pepe dolma to do justice to the pristine baby papayas.

So Maa makes a delectable pepe dolma the next morning. Baby green papayas. A tear-jerking spicy bhetki stuffing. A delicately balanced milk sauce to tie all the flavors together. Yet another novel delicacy from the kitchens of the Tagores.

Pepe Dolma, a must try I would recommend the next time you happen to spot baby green papayas in the local market. 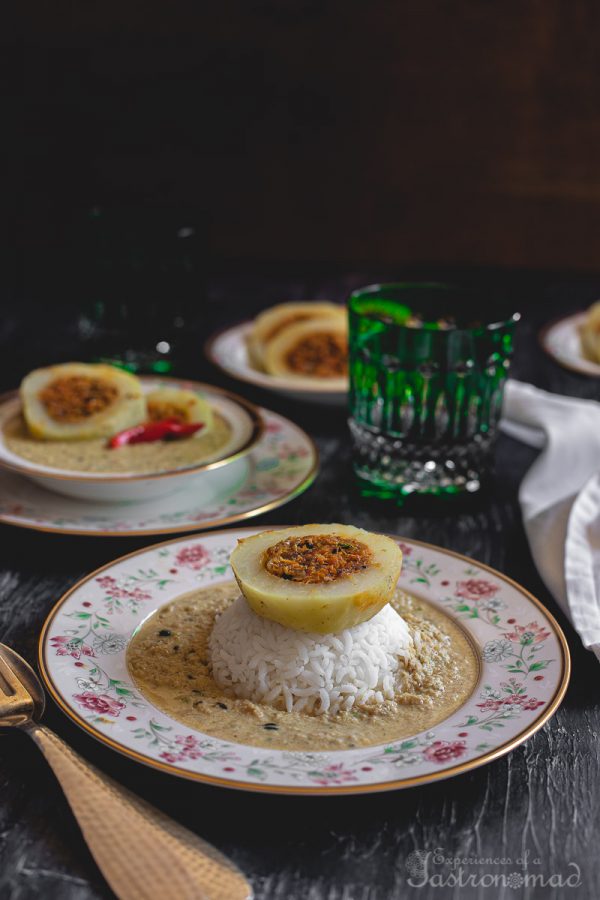 No worries if you are a vegetarian, or do not like fish, a spicy dal or paneer stuffing works just as fine.

Let yourself be silently drawn by the strange pull

Spices play a very important role in an Indian kit