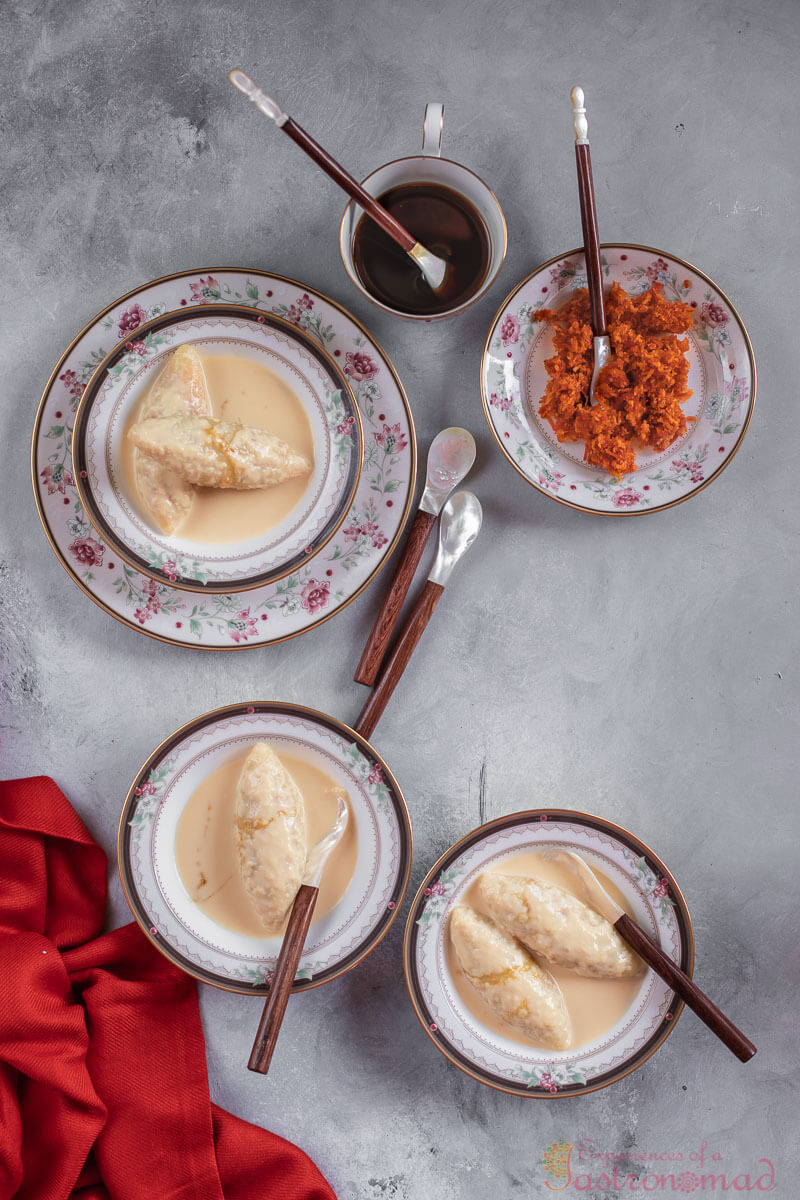 Has it ever happened, you are in the midst of cooking, when to utter dismay and indescribable frustration, you have discovered that your pantry doesn’t have one of the key ingredients or just not enough of it?

You scour the pantry in agony, feverishly pull down bottles and jars from the disciplined shelves, ransack the refrigerator, feel an irresistible desire to curse yourself, all the while praying for a miracle.
But in vain.
Lady Luck is not smiling on you.
At least not today.

Calm, you finally console yourself.
Brew yourself a Chamomile.

What are the options? You muse in silence.
Well, walk down to the local store and pick up supplies. That definitely is a possibility.
That sets the clock back though by at least half an hour if not longer.
You rule that out.
Is there anything at all you can do to salvage the situation?
You look around, waiting for that million-dollar inspiration, that magical eureka moment.
And then it hits you.
Necessity, as they say, is indeed the mother of invention.

Well, that was me in the kitchen this afternoon.
A dear friend was visiting after what must have been a decade.
What do you want to have ? I had asked her on the phone.
Doodhpuli, had been the prompt response. We don’t get Nolen gur there, she had rued.

All was on cruise control, till I realised that the cook had used up most of the coconut I had lovingly scraped for the puli stuffing and there was no coconut at home.
She had alerted me in all fairness, it just did not register in me then that the doodhpuli would be in severe jeopardy.

And it was, just moments before I was ready to throw in the towel and settle on a nolen gurer payesh, that my eyes fell on the gorgeous red carrots.
Couldn’t I stuff the puli with red carrots ? It started with a diffident question.
Why not ? Came the spontaneous response.
And the more I thought, the more I was convinced that the combination would spell magic.
Euphoria. 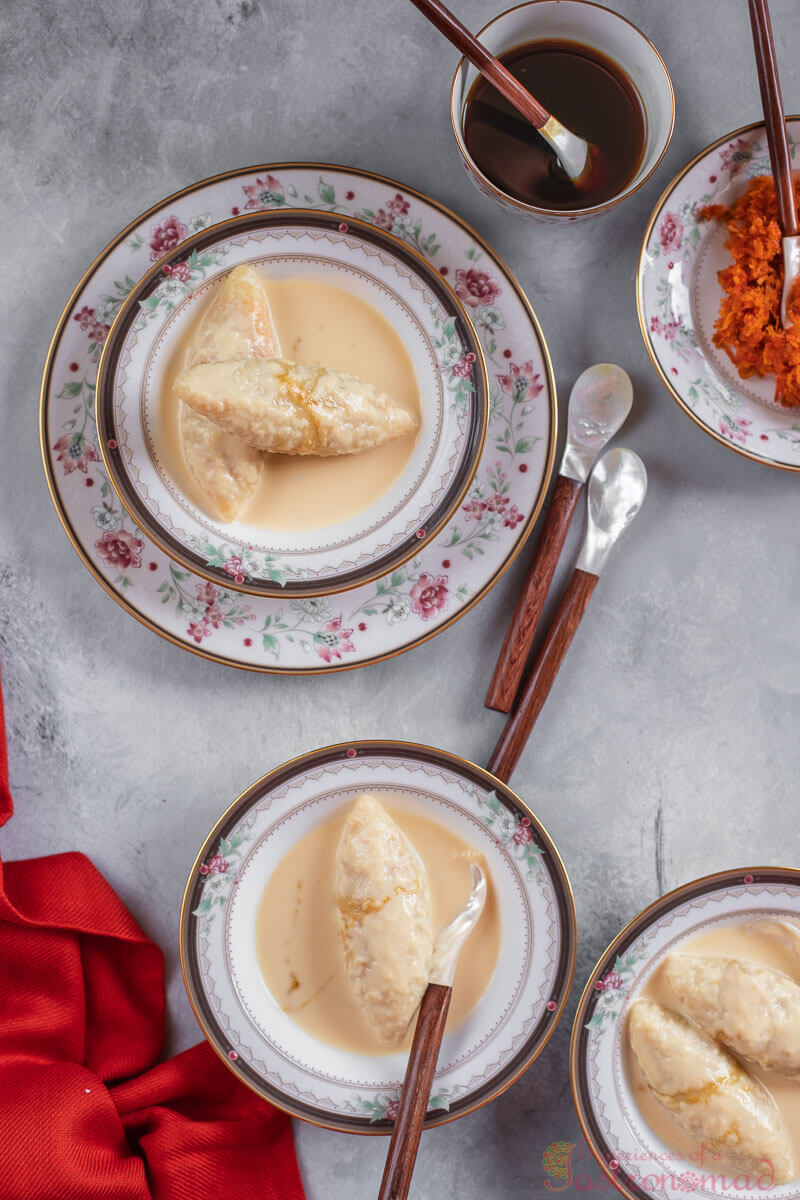 The gajorer doodhpuli turned out to be a runaway winner.
My friend loved it.
My family couldn’t stop raving about it.
Even I, usually the harshest critic of my own cooking, was pleased.
Do post the recipe on your blog, my friend had requested before she left.

Gajorer Doodhpuli. Rice dumplings stuffed with a delectable mixture of red carrots, jaggery and raisins (and yes the measly amount of scraped coconut that was left behind). Added to reduced milk, languorously stewed over a low flame, perfumed with the magic of nolen gur.

Don’t be a cynic for once. Do try it before the red carrot season runs out. I can guarantee that smile of content on your face. Enjoy !! 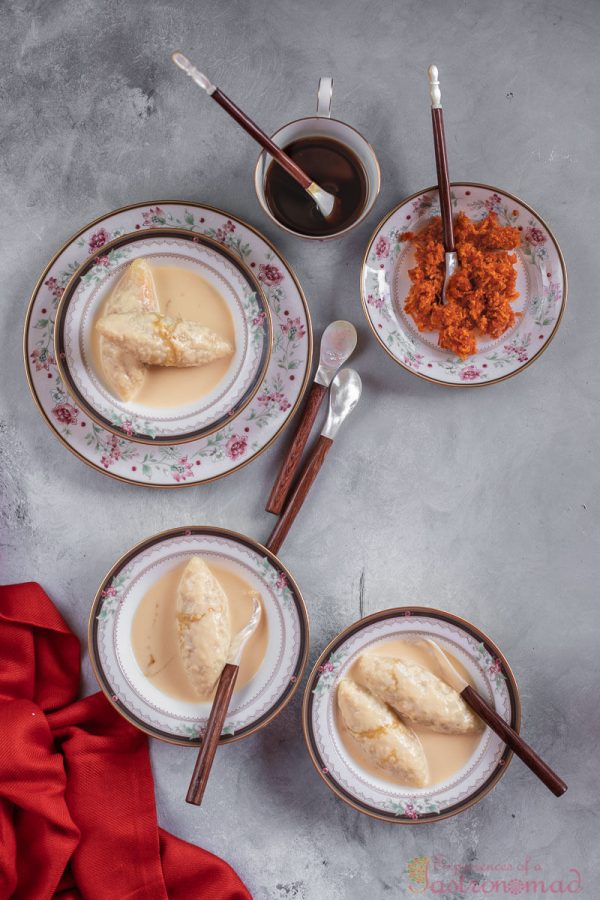 New post is up on the blog :) Finally the doorbell

You don’t need a day to celebrate love, do you ?

Fish stew, Bengali style. Fish and a medley of wi

And the temptation of nolen gur continues unabated

New post is up on the blog !! I want something nov

Maa’s delectable Koi Komola. A riot on the palat

This error message is only visible to WordPress admins